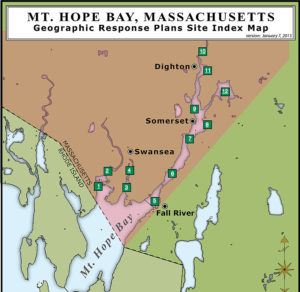 In response to the Bouchard-120 Oil Spill in 2002, Massachusetts Department of Environmental Protection (MassDEP) contracted Nuka Research to develop Geographic Response Plans throughout the state. The first region to be developed was for the Buzzards Bay region. This process entailed identifying stakeholders in the community who would provide input on strategies to include in a geographic response plan, hosting stakeholder meetings, and developing the GRP documents and maps. At the end of the process, 10 GRPs were developed within Mount Hope Bay. This process was replicated in five other regions within the state of Massachusetts, and ultimately yielded 158 GRPs.